A 2015 Map of the status of reaching unreached peoples: 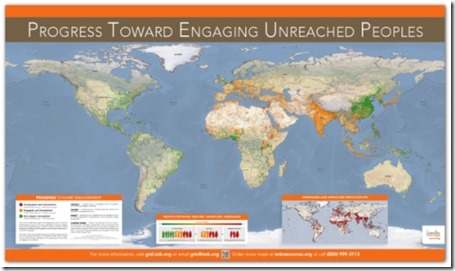 A 2015 Map of the global status of Evangelical Christianity:

So far we have discussed ways to reach people around you because of our burden for the lost people that we know. People that speak your language and share your culture. People that can be reached if you will simply live and act as a passionate, Jesus follower. But some dramatic changes occur when you start trying to take the message of Jesus to the world, and not just to your community.

It takes a different approach to go to a group of people who are VERY different, don’t speak the same language, and may have no concept of who Jesus is. It takes a different approach when you need to reach millions of people who only have a short time to hear the message before they die. You realize that the slow pace of using existing friendships means that it might take 200 years to get churches to the millions of people in that region who don’t know Jesus…and you wonder…could there be another way???

18 Then Jesus came near and said to them, “All authority has been given to Me in heaven and on earth. 19 Go, therefore, and make disciples of all nations, baptizing them in the name of the Father and of the Son and of the Holy Spirit, 20 teaching them to observe everything I have commanded you. And remember, I am with you always, to the end of the age.” (Matt 28:18-20, HCSB)

8 But you will receive power when the Holy Spirit has come on you, and you will be My witnesses in Jerusalem, in all Judea and Samaria, and to the ends of the earth.” (Acts 1:8, HCSB)

The Best Approach to Reach the World: Church Planting Movements aka Aggressive Discipleship

Discipleship as the most effective missions model:

(The text below is from peoplegroups.org)

“In 1998, the International Mission Board’s Overseas Leadership Team adopted a vision statement: We will facilitate the lost coming to saving faith in Jesus Christ by beginning and nurturing Church Planting Movements among all peoples. This vision statement guides the work of nearly 5,000 IMB missionaries serving in more than 150 countries around the world.

Secondly, there is an exponential increase. This means that the increase in churches is not simply incremental growth–adding a few churches every year or so. Instead, it compounds when two churches become four, and four churches become eight to ten, and so forth. Multiplicative growth is only possible when new churches are being started by the churches themselves–rather than by professional church planters or missionaries.

Finally, they are indigenous churches (led by people who were born in the culture, not missionaries from another place). This means they are generated from within rather than from without. This is not to say that the gospel is able to spring up intuitively within a people group. The gospel always enters a people group from the outside; this is the task of the missionary. However, in a Church Planting Movement the momentum quickly becomes indigenous so that the initiative and drive of the movement comes from within the people group rather than from outsiders.”

“There are millions are men and women who have left their homelands searching for a way to provide for their families and loved ones back home.  They come to the Middle East from countries throughout South Asia where there are more people living than anywhere in the world yet the least amount of witness for the gospel.  Our vision is to reach these men and women and equip them as obedient followers of Christ so they can be sent as missionaries to their own people.”

We want to support and LEARN from the work of the For All Mankind Movement, because we want to make our church reproducible in ways that will enable us to reach our target people group and beyond: military people.

FAMM works out of Dubai to reach foreign workers who have traveled from all over the Middle East to make money for their families on a temporary work assignment. They use a simple hygienic gift to start conversations that lead to people coming to faith in Jesus, and then they train those converts until they return home, hoping that they will start churches in their hometowns. Their efforts have been so successful, that they now support and manage churches starting other churches in India and Bengali, and beyond!

Other Keys to Worldwide Church Planting:

We must learn to explain the gospel clearly too. Remember, relationships pave the way, but a clear, compelling explanation of what Jesus did is important too.

The people you want to reach can be found in the oddest places.

You can reach Muslim’s in Clarksville, did you know that?

You can reach Chinese people in Australia.

You can reach thousands of cultures in America through our universities and in the cities of the U.S. like New York, Atlanta, and Nashville. Many cross-cultural missionaries now work out of U.S. cities and target a specific group of people to send back to their home country.

FAMM reaches people in closed countries by going into work camps and reaching workers who can take the message back to their home country.

The Crucial Task of reaching children.

Children are the most receptive, most responsive group to the message of Jesus. Their faith, if gained early is often the most powerful and life-changing as well. They often are the people of peace who bring their whole family to faith, both in the U.S. and overseas. They can learn second languages and bridge the language barrier faster. And they are the easiest to reach, because everyone is open to help with their kids. In order to reach the world, every good effort must consider the role children will play.

What area or need in the world are you most drawn to?

Take that area, or pick a new one and begin to research the needs there. Google search and learn about the reality of living in that country, in that region, in both the top and bottom of society.

What people who are not native to the U.S. do you know here in Clarksville?

What people groups live in large numbers here in Clarksville? Have you met anyone in the Korean community? The muslim community? The farming community? Which group of people would you be most interested in meeting?

Would you be interested in going to see the work the FAMM is doing in Dubai or India? Why or why not? Could you afford it ($3,000)?

This site uses Akismet to reduce spam. Learn how your comment data is processed.

Contango is an elegant, simple and clean design, emphasis on content. This theme is powered with custom menu, custom background, custom header, sidebar widget, featured image, theme options, nice typography and built-in pagination features. Contango Theme is suitable for any business or personal website. The Theme can work for various different niches. Contango is translation-ready and so much more.